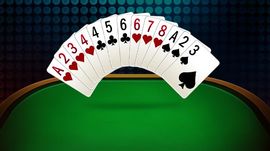 Card games have always been a staple and prime option of table game for many, regardless if there's an occasion or if you simply just want to have a relaxing and enjoyable time with others. It is not surprising to find out that you may already be aware of some card games and may have even played some before. However, one kind of game that you certainly would have little knowledge of is Rummy. Treated as one of the best games for two people, which can also be played by more players as well - this game is certainly one that you would be more than happy to try out. You can play Rummy at Yukon Gold online casino. If you have any question about their software, how to play or bonuses just contact them on their 24/7 live chat. Before you even think about inviting someone you know to play with you, it is best that you learn more about the basic rummy rules first.

Despite the fact that rummy and other card games such as casino war can certainly be deemed as one of the easy card games for adults today, it definitely holds huge potential in providing superb fun as long as you are already accommodated with how to play Rummy. Not to mention, it can also be used with a gambling format, where the winner could bring home a bag of money that's more than what you may have initially expected. Continue reading and find out more about what you need to know before you play Rummy.

Rummy simply makes use of a standard 52-card deck. If you have already played few card games already, then you may already have an idea of the ranks of cards when it comes to value. In the game though, Ace is more often than not, deemed to be the lowest, although this may not always be the case based on what type of Rummy you may be playing. While the Ace is the lowest, the Face cards which refer to the King, Queen and the Jack are considered the top cards in the game while the number cards follow afterwards. Scoring in terms of cards are termed as Pips. Pip values will help you determine how much the players would have to pay the winner of the game. Face cards equate to 10 Pip Value, the number cards come with Pip value according to their number, while Aces equate to 1 value each.

What's The Goal Of Rummy?

What makes Rummy one of the most fun card games for two or even up to 6 players, is the fact that the goal of the game is incredibly simple to understand. The goal is just for the player to make deals and lay off in turns, until one player is able to lay off their entire hand with nothing remaining. The one who'll win the game is of course, the first one who'll be able to clear their hands of cards. If you are lucky as well, one could even eliminate all their cards in one fell swoop right off the bat, and this would mean double payday for the winner also termed as the Rummy.

The game comes with a dealer and this dealer is the one who'll be distributing cards to the players. Of course, if you are exploiting the fact that this game is one of the best card games for two and you're playing with two players only, both the players should be provided with 10 cards in face-down position. Of course, the number of cards for each player goes down in amount as the number of players in the game increases.

In the game, there's also what the players call the stock which are basically just the remaining cards that were not distributed to the players. The top card would be the one which will shoulder the first spot in the discard pile. The game starts this way.

When all the players already have their cards, players would have to make combinations with the cards in their hand. They can lay off three or four-of-a-kind of cards or if the cards are of the same suite, you could also lay them on the table as long as they are in a sequence. These combination of cards are what the players call melds and even if a meld is placed down, you could still place cards on it by the laying off method. If ever you don't have any combination to put down or you simply just don't want to, you could simply just throw a card to the discard pile. Of course, before you do so, make sure that you have already been dealt with another card from the stock or drawn a card from the top of the discard pile.

The rummy also comes with the Gin Card Rummy variant with their own Gin Card Rules. In fact, there's even a gin rummy card game online you could enjoy. Without a doubt, the original Rummy, the Gin Rummy and other types of Rummy are card games worth trying out for yourself.