How to Play War Card Game Plus Tips to Win

Looking for a card game to play with a friend, family or even your loved one? If what you're looking for is one of the easy card games for adults and can even be considered a solid contender for the best card games for two people, then the War Card Game is definitely the game for you and your companion. To Play War Card Game is without a doubt, going to be one of the most exhilarating card game experience that will get you hooked to it in seconds. Its daunting name alone is enough for you to anticipate and become more excited to what it could offer to you and your opponent. If you're already feeling quite adrenalized and fired up to play this game, don't immediately jump into action. Spend some time reading the information here in this page, and find out how to play war card game and even win it.

How To Play War Card Game

This game is definitely worthy of being one of the easy card games for adults. In fact, it is even stated that even kids can easily learn and play the game for leisure. As a card game, it is already to be expected that it makes use of the 52 standard card deck with the four suites, aces, face cards and number cards. The game would pin you against an opponent and the 52 decks of card will be divided to the two players of the game in an even manner.

The division of the cards is something that's done in one deal at a time. The cards dealt to the players are given face-down and these games will accumulate to the players' sides until both already has half of the deck. This would be treated as their deck and it would be where they'll draw for the play.

When both players already have their own share of the deck, the game starts with the players both drawing a card from the top of their own deck. The cards they've drawn will be compared to each other's cards and the one who'll win, is of course the one who'll get the card with higher value. The winner would get both the cards as well. When a tie happens when the two cards drawn are of the same value regardless of the suites, War happens, then two cards will be drawn again, one of which is face down and the other face down. The game will proceed until the tie is broken.

The flow of the game will continue as what you may expect from the aforementioned rules. The moment the other party loses all their cards, the one who has magnificently collected the full deck is declared to be the winner of the War Game. 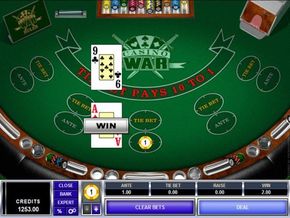 If you think that you are already quite good at war game, you could very well try your luck out and play the casino version of the war card game - the Casino War Game. This kind of game, as its name implies, is played in a waging establishment and in fact, it has even traversed the online platform already and has rendered an online version that you'll surely enjoy playing.

Although the core of the game remains quite the same, there are certain differences that make Casino War Game distinct from your natural war game. Nevertheless, this doesn't diminish the fact that the game is still as exciting as ever, and jam-packed with lucrative opportunity for the player.

Compared to the classic War game, this kind of game is between the dealer and the player. The cards used are up to a whopping 6 decks and instead of dividing the two decks evenly, the player and the dealer would just have to draw a card each for the comparison later on.

In this game, you would have to place your wager already before drawing any card and just like the classic rule, the one with the higher card wins. Of course, the previous rules also apply when a tie occurs and this is also where the exciting War happens.

There are numerous best card games for two people out there and if you are always on the lookout to find more games for two, it will never hurt to add war card game to the collection of games you could play. In fact, it may turn out to be a potential favorite for you and your go-to opponents and this would undoubtedly bring you more ecstatic experiences.